Indian Association of Teachers of Library and Information Science 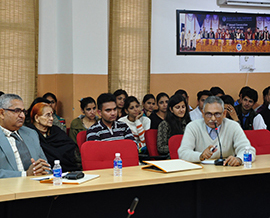 The idea of founding an association of library science teachers was floated at the Unesco Regional Seminar held at the University of Delhi in October 1960 and later on discussed at the following three seminars:
All India Seminar on Education for Librarianship held at Banaras Hindu University (1963),
All India Seminar on Education for Librarianship held at SNDT Women’s University (1965), and
All India Seminar on Teaching of Library Science held at Delhi University (1966). To elicit the opinion from teachers in library schools, a circular was issued by Prof Bashiruddin in collaboration with the late Prof. Das Gupta and P.N.Kaula from the Rajasthan School. At the Delhi Seminar in 1966, the same issue was reviewed but without yielding any result.
Mr Derek Langridge, principal lecturer, North Western Polytechnic School (England) delivered Sarada Ranganathan Endowment Lectures at DRTC, Bangalore on ‘Teaching of Library Classification’ from 15-19 December 1969. This provided a fortuitous opportunity to discuss the issue of having an organization for teachers of Library Science. (Source: Kaula, 1970)

Formation of the organization: On 19th December 1969, a meeting of the teachers of library science attending the Sarada Ranganathan Endowment Lectures was convened by Mr. P. N. Kaula at DRTC with Mr. C. K. Langridge in the chair. This was attended by teachers from several Library schools. Dr. D. B. Krishna Rao asked Mr. P.N. Kaula to give his opening Address stating the purpose of the meeting. Mr. P. N. Kaula described the structure of Library education in the country and the need for having an association of teachers of Library science .He also stated the efforts made in the past and the interest shown by the teachers at the seminar. Dr. D. B. Krishna Rao declared that the Indian Association of Teachers of library science be formed with an ad-hoc committee constituted for this purpose. Mr. Ganesh Bhattacharya proposed a vote of thanks. In the end a Committee was formed with Dr. D. B. Krishna Rao as its Chairman and Mr. P. N. Kaula as the Secretary. Thus was born the Indian Association of the Teachers of Library and Information Science (IATLIS) a national professional organization to further the cause of library education in India. The General Body meeting of IATLIS was held on 21st December 1970 to adopt the draft constitution circulated to members earlier with Mr. P. B. Roy in the chair. The constitution was discussed and adopted unanimously. (Source: Kumar, 1991a)

The revival: After the foundation meeting in 1969, the first ‘National Seminar’ was held in 1970 at DRTC, Bangalore with the blessings of Dr Ranganathan and dynamic leadership of Prof P.N.Kaula. Dr D.B.Krishna Rao, Padmasri Bashiruddin, Prof A.Neelameghan, Prof M.R.Kumbar played a key role in the formative years of the Association. However, the Association was remained dormant from 1973-80. In March 1980, Prof Kaula conducted an All India Seminar on Relevance of LIS Education to the changing needs of the country at BHU. At this Seminar IATLIS was revived with Prof Kaula as President and Prof Kumar as General Secretary. Since 1981 it was active once again and IATLIS Communication and several other activities were initiated by Prof Kumar. National Seminars are being conducted regularly since 1986. (Sources: Kumar, 1991b; and Kumar, 2009)

Recent Activities: Prof. Jagtar Singh was unanimously elected President of IATLIS at its XXV National Conference in November 2008 at Panjab University, Chandigarh. Today, IATLIS is a strong and vibrant professional association of LIS teachers that has more than 575 members. Since December 2008, more than 150 LIS teachers and professionals from India and abroad, such as Nigeria, Republic of China, and the USA have become members of this professional body. LISERT India - a moderated scholarly discussion list on LIS Education Research and Training in India was launched in December 2008 by IATLIS that has 166 members. For details and subscription to this discussion group visit: http://groups.google.co.in/group/lisert-india.

Workshops: IATLIS organized first National Workshop on ‘LIS Teachers and the Digital Future’ at the Central Library, IIT Madras, Chennai from 17-19 January 2007. The workshop was attended by 46 participants from 17 states. Central Library, IIT Bombay in collaboration with IATLIS (Indian Association of Teachers of Library and Information Science) organized a 3-day National Workshop on LIS Education in Digital Era from 13 -15 June 2007 on the campus of IIT. It was attended by 38 participants including library and information science teachers, librarians and research scholars from all over the country.

Lecture Series: IATLIS has also started its lecture series with collaboration of Satinder Kaur Ramdev Memorial Trust for Advancement of Librarianship (SATKAL). First IATLIS-SATKAL annual lecture was delivered by K. K. Banerjee, Director, RRRLF and Director (I/C), National Library, Kolkata on the topic “Role of RRRLF in Promoting Public Library services all across India” during the IATLIS National conference at the University of Burdwan on 27th November 2009. Second lecture in the series and the First IATLIS-SATKAL-ETTLIS leading edge paper on “Libraries on the move: Emerging Mobile Applications for Libraries” was presented by John Paul Anbu K, Head, Periodicals University of Swaziland, Swaziland during the International conference on Emerging Trends and Technologies in Libraries and Information Services (ETTLIS) held at Jaypee University of Information Technology, Waknaghat (Distt. Solan) from 03-05 June 2010. Thitd lecture in the series was delivered by Dr C.R. Karisiddappa at IATLIS Conference, University of Pune, Pune 17 November 2010.

Future Plans: IATLIS plans to start a peer-reviewed journal IATLIS Journal of Library education and Research soon. It has initiated discussions with leading institutions, universities and associations in the Maldives, Mauritius, and Sri Lanka for organizing workshops and training programmes for LIS teachers and professionals. Besides, IATLIS would explore possibilities for collaboration and tie-ups with interested institutions in India and abroad.